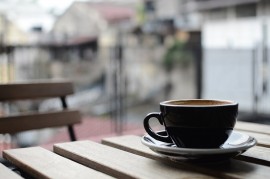 There’s something we’ve always wondered: Why is coffee called “Joe?” Well, we did a little digging and found out there are several theories, many of which date back to World War I! We also found out there are a few other nicknames for this beverage loved ‘round the world.

Why is Coffee called ‘Joe’?

While there isn’t a strict answer to this question, there are several interesting theories.

What Are Some Other Popular Nicknames for Coffee?

Through the years, coffee has developed a few other nicknames, including Java, Mojo, Brew, Cuppa, Ink, Mud and Perk. Add onto that the many different drink names baristas create for their coffee-loving customers and coffee has hundreds of names and nicknames. What’s your favorite?

Which Roast Has the Most Caffeine?

If you’ve ever bought coffee at the grocery store, you know that there are an array of roasts from which to choose. The National Coffee Association of USA tells us:

Light roasts – Light brown in color, this roast is generally preferred for milder coffee varieties. There will be no oil on the surface of these beans because they are not roasted long enough for the oils to break through to the surface.

Medium roasts – This roast is medium brown in color with a stronger flavor and a non-oily surface. It’s often referred to as the American roast because it is generally preferred in the United States.

Medium dark roasts – Rich, dark color, this roast has some oil on the surface and with a slight bittersweet aftertaste.

Dark roasts – This roast produces shiny black beans with an oily surface and a pronounced bitterness. The darker the roast, the less acidity will be found in the coffee beverage.  Dark roast coffees run from slightly dark to charred, and the names are often used interchangeably — be sure to check your beans before you buy them!

Now, let’s cut to the chase. Which one has more caffeine? You may be shocked to find out … a lighter roast of coffee actually has a slightly higher concentration of caffeine!

Where to Find a Cup of Joe in Hawley, PA

The Cocoon Coffee House, right here in Hawley, PA., is the go-to place to get a cup of Joe. Located on the Hawley Silk Mill campus, in what used to be a building that housed actual cocoons for silk worms, this historic coffee spot serves up an array of coffee beverages to suit any taste. Brewing only the best fair trade coffee from Electric City Roasters, Cocoon Coffee House is a great place to grab coffee or tea any time of day, as well as fresh-baked items, salads and sandwiches.