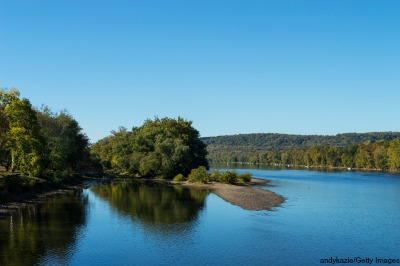 In the early 1900s, an aspiring writer would settle into a farmhouse overlooking the Lackawaxen and Delaware Rivers with his young family. Years later, he would become one of the greatest western writers of the 20th century. His name was Zane Grey. When you visit the Upper Delaware Scenic and Recreational River Park, you’ll get a glimpse into the writer’s diverse work and life at the Zane Grey Museum. Whether you are a fan of his work or looking for a fun activity near Hawley, we highly recommend a visit to the park and museum!

What are your plans after you stop by the Zane Grey Museum? Stop by Hawley Silk Mill for some of the best shopping, dining, and entertainment options in the Poconos!

In 1872, Pearl Zane Grey was born in a small Ohio town founded by his mother’s ancestors. As he grew, he developed deep interests in writing and baseball, two pursuits he would soon follow. His skills in baseball attracted the attention of the University of Pennsylvania, who were quick to offer him a scholarship to the school’s dental program. In 1896, Zane graduated with a degree in dentistry but chose to play amateur baseball for a couple of years. He finally established his own dentistry practice in 1898 at New York City.

Zane loved to take vacations from the city, mostly to the Lackawaxen, PA, area. During one of his getaways in 1900, he met a 17-year-old girl named Dolly, who would soon become his wife. She was a very positive influence on Zane and encouraged him to follow his passion for writing despite the constant rejection from publishers. With her support, Zane had his first article published in Recreation Magazine in May of 1902. He left his career in dentistry to pursue writing full-time. After leaving his practice, he and Dolly moved into their Lackawaxen farmhouse.

During a Campfire Club meeting in New York City, Zane met western conservationist Colonel J.C. “Buffalo” Jones. He accompanied Jones on a hunting expedition to the Grand Canyon as a writer and a photographer. This trip became a turning point in the writer’s career as his account of the adventure was published by Outing Press in 1908. Just two years later, Zane’s first novel, entitled “The Heritage of the Desert,” was published. It was an instant success and sparked the release of 15 more books. The most notable and popular of these novels was “Riders of the Purple Sage,” which was published in 1912. In 1918, Zane moved his family to the now famous Zane Grey Estate in California. Of course, they still kept the family home in Lackawaxen, which Zane Grey visited for the last time in 1929.

The Creation of the Zane Grey Museum

In 1939, Zane Grey passed away. His wife sold their Lackawaxen house 6 years later to Helen James, the daughter of a long-time family friend. The home was converted into the Zane Grey Inn, which she and her husband operated for 25 years. Over the course of those years, she collected memorabilia and original artwork associated with Grey along with several other items of interest. In 1973, they reinvented the home once again and opened the Zane Grey Museum. Helen operated the museum until 1989 before selling it to the National Park Service. The park felt it necessary to include the old home as a part of the Upper Delaware Scenic and Recreational River because of the area’s influence on the budding writer. The self-guided museum is open from Memorial Day to Labor Day and manned by knowledgeable rangers and volunteers who can answer all of your questions.

What You’ll Find in the Zane Grey Museum

The museum, located just 18 minutes outside of Hawley, is a great place to explore the life and career of one of the 20th century’s most popular western writers. Inside, you’ll see most the memorabilia, photographs, and Zane Grey books that belonged to the writer along with the rooms that he used as an office and study.

For more information on the life of Zane Grey or the museum, be sure to visit the Upper Delaware Scenic and Recreational River website!

Since its construction in 1880, Hawley Silk Mill has served as a vital part of the community. Although its days as a textile factory have long-since passed, the old factory has never been more vibrant than it is today. Stop by for your favorite cup of coffee from the Cocoon Coffee House and Bakery. You can also shop for locally-sourced foods and ingredients here too. Browse the variety of shops or wander around the art gallery. The options for fun are nearly limitless! Add Hawley Silk Mill to your Poconos vacation itinerary and we look forward to welcoming you soon!